I love this country! I’ve sadly only spent 4 weeks there, however I can safely say, I didn’t waste anytime getting stuck into it! Here’s my favourite top spots to check out!

LAOS IS PURE BLISS!! Diverse and rich in culture. This stunning country will keep you wanting more of it! This visa is like a few of the other South East Asian countries, issuing 30-day tourist visas on arrival at international airports and most international border crossings. The whole process is pretty chills, get the form, fill the form, pay the money done…  You need between US$30 and US$42 in cash, one passport-sized photo and the name of somewhere you will be staying.

Right now to the good stuff…..

This has to be the cutest capital city, I’ve seen in Asia, so far! Absolutely stunning! The picture below is a lovely walk, along the main boulevard, with the Mekong River creating a boarder between, Laos and Thailand.  Which is you drive 20Ks down the road on a bike, you’ll be at the Friendship bridge! Always worth a pic! 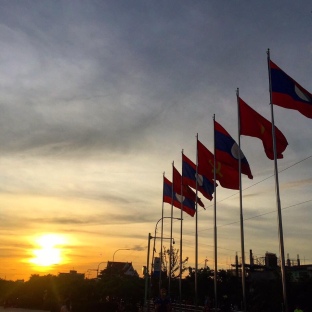 I joined in with some sort of aerobics blended with tai chi type exercise going on, granted probably looked ridiculous but never the less gave it a go. There’s also a market down here in the evening.

There’s heaps of places to eat and drink, particularly on the river front.  I found some of the best coffee in Asia here, lots of Cold Brew!

Meditate with monks at Sok Pa Luang, just one of the many temples to visit in Vientiane.

Visit the museums. Particularly the COPE organisation, this is a locally run charity which provides prosthetics for victims of the bombs that lay unexploded from the Vietnam war, that still haunt Laos today. You’ll find heaps of information there.

Most importantly and my favourite…. Patuxai Victory Monument. Clime up the stairs to the top and enjoy the view of the vertical run way! 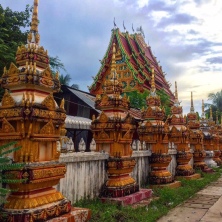 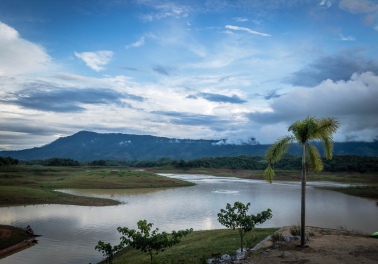 OK so I know what you’re thinking, where’s the horrific looking pictures of very drunk people tubing and although that’s an awesome part to Vang Vieng, this beauty was worth the stop, only 15 minutes south. Sanctuary Nam Ngum Beach Resort, I’m a savvy traveller at the best of times but every now and then, a girl needs more than a $2 shared dorm! This magical place I found with a lot of research online, yes next to the 4000 islands, it’s one of the closest places to a beach! With bungalows over looking the water and a sunk in swimming pool, just to mention a few things, this place is amazing!  http://www.sanctuaryhotelsandresorts.com/english I found it for cheap on booking.com

So after a few days of relaxation, peace and tranquility in paradise, grab yourself a Tuk Tuk and head onto the madness that is Vang Vieng. I must admit, as “touristy” as Vang Vieng is, the fact of the matter is that this place actually is sweet and I can see why heaps of travellers flock here. It’s beautiful limestone mountains that tower over the river, with many caves to explore, Tham Chang Cave, Tham Khan Cave, Tham Nam (Water Caves) be sure to check them out and the Blue Lagoon. There’s a million different tours you can grab to these or drive out to some of them yourself. The tubings great fun, but if you don’t fancy it, there is kayaking option, also great fun in the wet season! 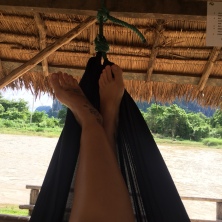 Vang Vieng is a chilled stoners paradise, easiest way to describe it, spend your days chilling in a hammock, listening to some sweet as music and watching the river flow by… but by evening with a lot of places to drink in what I feel is actually a pretty small town, the atmosphere is pretty wild! Defiantly a place to let your hair down.

Super easy to get to Vang Vieng from Vientiane by bus is only about 5 hours with the stops and who doesn’t love a tight squeeze mini van! Which being your cheapest option starts about $10. There luckily is more than just the mini van option in Laos, with bigger buses running and even boats in some parts of the country.

So as much as a rep this place has, drop by, make your own mind up about it!

One of the most iconic things you can do in Laos! The Luang Prabang Waterfalls – Kuang Si Falls.

The photo above is just one of these bad boys and the tallest one at that. You can climb up one side to the source and down the other, through bushes, small tracks and even some stairs going through water! To get out to the falls, you can look into many different ways, my fave grabbing a scooter for $20 US a day and driving the 23Ks out there, be careful, the roads aren’t the best and there’s one or two holes you gotta watch out for, but breathe in the fresh air as you ride through rice fields, with a mountainous backdrop. Other ways you could grab a shared Tuk Tuk up there, these start from about 200,000 Kip – $25USD they will round up as many people as possible and you all split the cost. Another option grab a private Tuk Tuk for the same price $25, they’ll take you up there and wait for you too. 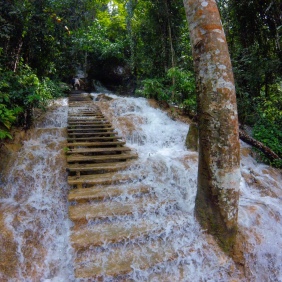 Luang Prabang itself as a city is my favourite! Its beautiful, quaint and peaceful. Filled with old, well preserved French style buildings mixed with some of the most beautiful Buddhist temples you’ll see. Every morning, hundreds of monks from the various monasteries walk through the streets collecting alms.

One of the city’s major landmarks is Mount Phou Si a large steep hill with 150 metres steep staircase which leads to Wat Chom Si shrine and a beautiful look out of the city!

There’s heaps of wonderful places to eat and drink, with a variety of cuisines, so you can mix it up or just not eat noodles for the night! There’s yoga places, massages and many many more things to potter around. Take a trip on one of the long tail boats, down the Mekong river at sunset! 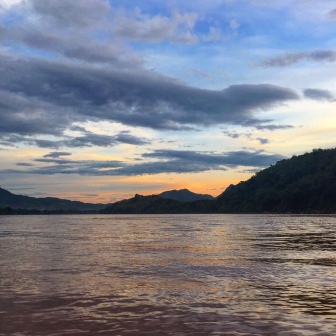 To get to Luang Prabang, grab the bus from Vang Vieng and you’ll be there in about 3 – 5 hours, yes i know broad, but this is Asia! Or if going from Vientiane, will take you about 11 – 13 hours. Over night buses are pretty sweet in Laos, not quiet as nice as Vietnam but still comfy never the less, pretty cheap too.

4. The Plain OF Jars

The Plain of Jars they call them. Absolutely fascinating! I adore Laos and love doing the run from Vientiane, Vang Vieng and Luang Prabang but this was amazing, off the “normal” tourist route and a must do! It’s not even that hard to get to, we all know it’s South East Asia and there’s some form of transport going somewhere, well most of the time. Anyway jump on a small and tight compact 16 seater mini van, drive for best part of 8/9 hours through the hills and sharp bends, warning take some travel sick pills if you suffer from it! And then you’re there!

After all the twists and turns, you’ll end up in a town called Phonsavan. It’s pleasant, a few quirky things about, the town seems to be based around, two very big dusty roads, but you’re not in the complete middle of no-where, you’ll still find an ATM, pharmacy and if I remember correctly, some of the best local food I’ve had.

While you’re in Phonsavan, check out the local UXO (Unexploded Ordnance) Information centre. Laos sadly was one of the worst bombed countries, during the Vietnam war and the ripples of that war, still live on today.

So check yourself in, enjoy some good food, hire yourself a bike for about $15 and scooter yourself around the 50K track to get out to the Jars! Surprisingly, for South East Asian roads, these ones aren’t to bad.

When you get out there, you’ll find 3 different sites, site 1 of course being the biggest. There’s an information centre and of course somewhere to park your bike. You’ll have to pay a small fee to the little “guard” but don’t worry it won’t break the bank and by now you should be used to it.

The walks are lovely and the red and white marks for the tracks appear quite clear, these markers are for the cleared UXO areas and are deemed safe. 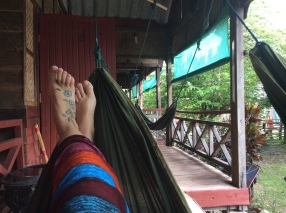 This picture somes up the vibe of this glorious place!! The closest thing you’ll get to a beach in Laos. This is in Don Det, just one of many of these islands. Admitally a little long winded to get to it, however i’ve always found the longer the journey takes the better it is! (Unless you get that one time it doesn’t and that’s bloody savage!) Anyway get the overnight bus to Pakse, I did mine from Vientiane, as I had looped back around to the capital, that bus journey is about 16 hours to Pakse, you’ll get there in the morning and in true Asia fashion, you’re carted into a tight squeeze 16 seater mini van and then driven down to, Hat Xavi Khun, which then, last but not least, you’ll go get your boat ticket, wait sorry I say boat but think small, very small and taken to the island that you’ve chosen, my case Don Det! Sound hectic? It is! But easy to get ticket from anywhere in the country and you won’t be the only one on your own doing it, so worst case follow all the other backpacks! There’s no transport on these islands, apart from the odd few things, but you’ll get there and walk to your hostel/hotel choice. Ha mine was the other side, which admittedly was only 15/20 mins walk, but as we all know, that’s the last thing anyone really wants to do after all that travel! But hand on heart this is my favourite place in Laos!

If you’re doing the run of South East Asia, there is a boarder crossing between Cambodia and Laos at these islands. Which isn’t always open in the wet season, so worth a check.

Finally, not only being a beautifully chilled area, filled with so much love and awesome places to eat! (Stoners paradise 🙌🏽) It’s the Mekong Water Fall! Spread across 14ks of water and in the wet season, is the biggest waterfall in the world, with volume. You can ride a push bike down to the look out, haha which again in wet season is just hilarious, sooooo much mud! Doesn’t look half as impressive in these pics, but you get the idea! 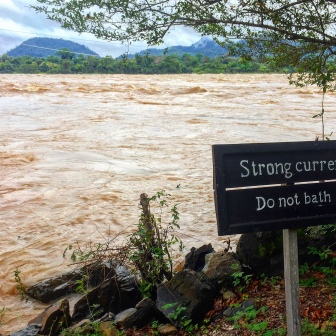 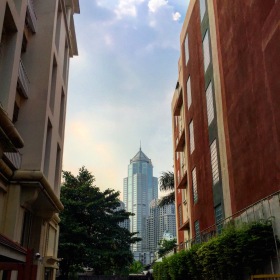 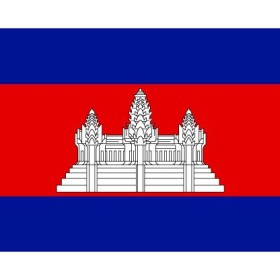 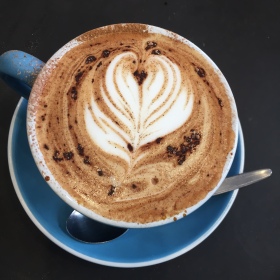 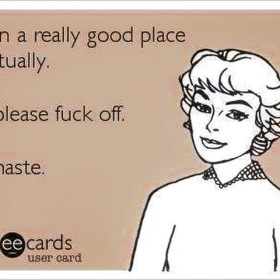